The two of these have something in common. They are both writers who don’t get all the credit they deserve.

Ghost Writers
Ghost writers are writers who write under the name of a different author. They are not to be confused as authors who use pen names and pseudonyms. Authors who use pen names are still writing as themselves and they will receive the credit for their own works. Ghost writers on the other hand, are writing under the name of a different person and that person will get the credit whether they want it or not. Their job is to write a book, but act like a ghost. An example of some books that are written by ghost writers are the most recent Vampire Diaries novels. While the first few are written by L.J. Smith, the ones that just got published weren’t written by her but are still published under her name because she lost the right to keep writing them herself.

Co-authors
A lot of times co-authors don’t get the credit they deserve either. Sure, sometimes that’s not the case, but many times it is. Co-authors are exactly what the name implies, an author who helps another write books. The sad part about this that while sometimes books written by co-authors can be really well written, a lot of times only the most popular author receives the credit. For example, if I asked you who wrote the Confessions series, most people will say James Patterson, but forget about his co-author Maxine Paetro. I’m not saying it’s entirely his fault that he gets most of the credit for writing the books, but it’ll be nice if she is acknowledged as well.

Long story short is that pay attention to who wrote your book if you really like it. Make sure it was solely that author before giving them all the credit. I cannot tell you how many times I’ve seen or heard people saying how good a writer an author is just because of a book written by a ghost writer or with a co-author (who seems to not exist). Everyone works hard to get the words of the stories you love into the pages of the books you enjoy. Don’t give one person all the credit when a whole team deserves it. 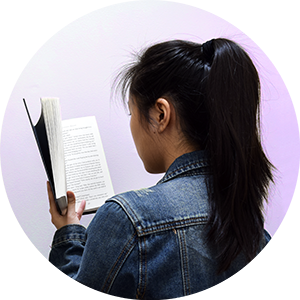 Hi!! I'm Emily, but you can call me Emz. I'm a 20 year old college kid who loves a good adventure, whether it's through books or travel.